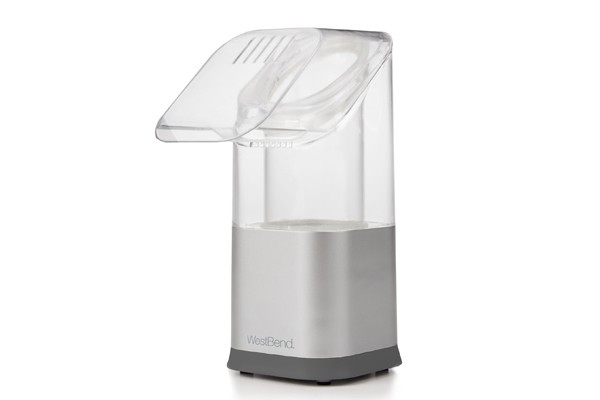 The West Bend Clear Air Popcorn Machine (89013) is one of the most stylish appliances for popping corn. The contemporary look of the popper matches well with other stainless steel kitchen appliances, and the clear chamber uniquely provides a view into the popping action.

In our test, we added kernels to the fill line marked near the bottom of the chamber. The popper takes 1/2 cup of corn, but there is no measuring cup included. Once plugged in, the unit finished popping in approximately 3 minutes. There were a few unpopped kernels in the bowl, but only slightly more than average.

In repeated testing, we found two issues with the West Bend Clear Air Popcorn Machine. When adding kernels to the chamber, it can be hard to see the fill line depending on the lighting in your kitchen. We slightly overfilled the chamber on two occasions, and both times the kernels began to burn and produce smoke. When overfilled, the updraft of air is not sufficient to agitate the kernels.

The other issue we experienced was with the chute. The chute on this popper is plastic, and rests atop the popping chamber. It has a very small lip to hold it in place, and can be knocked off easily. It will not fall off unless bumped. This happened a couple of times when moving the bowl or adjusting the popper, blowing popcorn all over the counter each time.

West Bend provides an instruction manual and a one-year warranty. There is no measuring cup or butter melting capability included.

The West Bend Clear Air Popcorn Machine is one of the quietest and most stylish poppers we’ve tested. The compact design and low noise output make it a nice addition to smaller kitchens or apartments. The only two issues we experienced with the appliance are easily avoided. 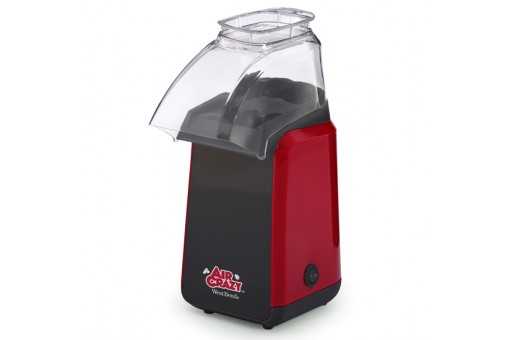 West Bend is well known for kitchen appliances, offering everything from coffee makers to slow cookers. The company currently offers a total of 8 popcorn poppers for sale, including oil, hot air, and “theater style” devices. The West Bend Air Crazy Hot Air Popcorn Popper (82418) is inexpensive and widely available, so how does it compare?

The Air Crazy is a compact unit, intended to be stored out of the way when not in use, and the retractable power cord helps. The power switch is another nice feature, which more expensive units often lack. A measuring cup in the top chute doubles as a butter warmer. The top chute and measuring cup are both dishwasher-safe.

Hot air poppers use a heating element and fan to heat warm air, and blow it up through the kernels. Once popped, the corn should push out through the chute into a waiting bowl. West Bend recommends a 4QT bowl to hold the 16 cups of popped corn.

For our test, we filled the measuring cup all the way (1/2 cup of kernels), plugged in the popper, and turned it on. Our bowl was filled and the popper finished in just under 3 minutes, a bit slower than other similar units (2-2 1/2 minutes is normal). There were a few more unpopped kernels in the bowl than average, but not a significant amount.

The Air Crazy was noticeably quieter than the average hot air popper (but not as quiet as the West Bend Clear Air Popcorn Machine).

West Bend provides an instruction manual for the use and cleaning of the popper, and a one-year warranty. We did not try melting butter in the measuring cup, but the directions do recommend starting with softened butter.

The power switch is a nice feature, and made the popper much easier for the kids in our family to use. The retractable power cord helped with stowage.

The West Bend Air Crazy Hot Air Popcorn Popper is quieter and more compact than most competitors. It does take a little longer to pop a 1/2 cup of kernels than other similar units, but offers several convenience features not normally found in this price range. 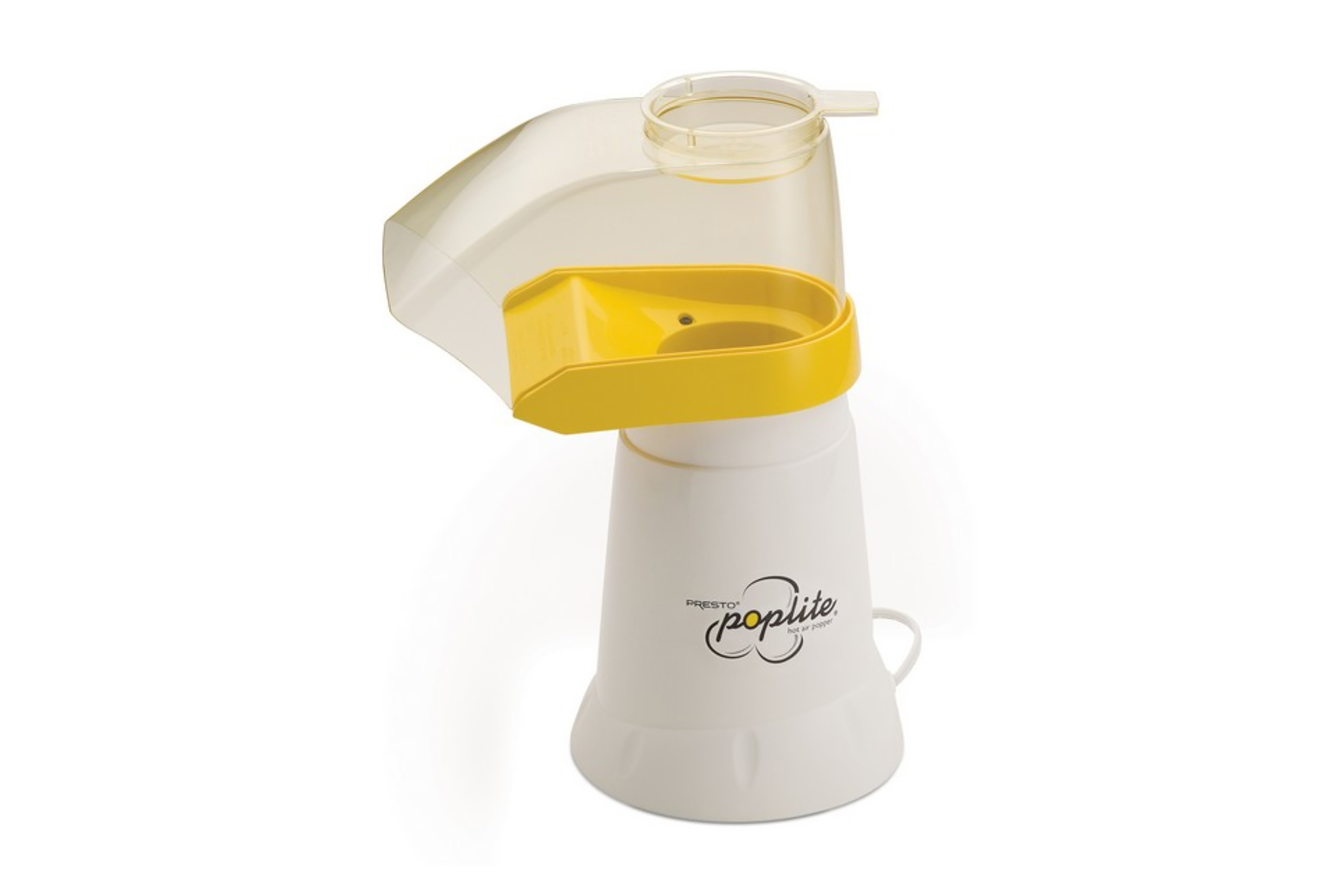 Presto is one of the biggest names in popcorn poppers, and the Presto PopLite Hot Air Popper (04860) is one of the most popular. But how does it perform? Will it work for you?

The PopLite is a basic air-popper, with a measuring cup in the top chute which doubles as a butter warmer. The chute and measuring cup are not dishwasher-safe.

Hot air poppers heat popcorn kernels from below, with an updraft airflow which pushes the popped corn out the chute and into your waiting bowl. Occasionally, an unpopped kernel will bounce out with the popped corn. We found that this happened much less with the Presto PopLite than with other similar poppers. In our tests, the PopLite came very close to the manufacturer’s claimed 18 cup output, and left very few unpopped kernels.

No oil is needed in the cooking process, and for that reason, some people find air popped corn to be dry. This is easily addressed by drizzling melted butter or spritzing olive oil or other light oil-based topping after the popping is complete. The PopLite can even help, as the kernel measuring cup on the top of the chute serves double-duty by melting butter if you don’t mind the additional cleanup.

In our testing, the PopLite turned 1/2 cup of kernels into popcorn in approximately 2 minutes and 30 seconds. This in on par with the best air poppers, as fast microwave popcorn, and twice as fast as oil-based poppers.

The PopLite is slightly louder than average for an air popper.

Presto provides a manual on the use and cleaning for the popper, and a one-year warranty. There is a cup on the top of the chute for measuring a 1/2 cup of kernels and melting butter if desired.

The Presto PopLite does not have a power switch, so starting and stopping the process requires plugging and unplugging the power cord from the wall. This is inconvenient, and could be a concern for those with children who may use the appliance.

The Presto PopLite Hot Air Popper is a no-frills performer that efficiently makes excellent popcorn. There are almost no unpopped kernels left, and very little cleanup required when the PopLite is finished.